Established in 2010, Simba Jones operates from its own premises in Wiltshire. Simba (meaning "Lion" in Swahili) spent a happy and slightly wild childhood in Kenya on the east coast of Africa. She and her sister spent most of this blissful childhood barefoot, in the heat of Mombasa, surrounded by a menagerie of animals - dogs, ponies, tortoises and wild animals that visited their garden such as monitor lizards, monkeys and snakes. Simba and her sister spent most of their time swimming in the Indian Ocean, carefully avoiding the sea urchins; but if they weren't swimming, they were either flying about on ponies or motorbikes. Fast forward the decades and Simba now live in Wiltshire with her husband and is still surrounded by animals (though not the monitor lizards, monkeys and snakes!) and often escapes onto Salisbury Plain either with her dogs, Mouse & Dudu (means "insect" in Swahili), or on her horse Lola. Simba's love of Africa is deeply ingrained and has inspired this collection. The combination of the African childhood, the love of dogs and horses, rugged nature and being outdoors has created "Simba Jones".

Interested in the Swahili language? It is also known as Kiswahili and is the first language of the Swahili people. There are some cool words in Swahili...

It's a fun language and is very theatrical. The native speakers throw their hands and arms about a lot for emphasis and their faces are really full of expression. In Kenya on the coast it is always boiling hot, and I once tried to describe the freezing cold of the English winter to a local fisherman. My vocab has got a bit rusty, so I opened the freezer compartment of a fridge and said "it's like this in here. He fell backwards laughing! I can't think what was so funny about it but they do love a bit of drama. 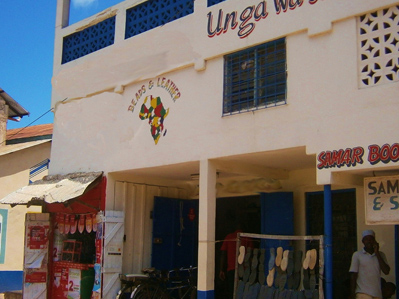